DeliciousBakedPie's Mom is looked to be the more of a kind mom, almost making it seem like she wants to spoil her child. But she is mainly nice. For a long time, she has only appeared in Food Orb 4 - America at the end of the game. In the cutscene, she freed DeliciousBakedPie from Evil Donut's cage and then takes ALL of his friends to McDonalds, including Tinfoilbot. She returns in Greenboy Orb 8 - The Puzzle Factory, trapped in the transportation cage along with DeliciousBakedPie. She appears to be wearing a pink shirt with various flowers patterned on it. She wears similar pants like DBP's, except it has black shoes with red stripes on it. She also has red nail-polish. She also wears a warhelm and the same default face as DBP does. Nothing much is known about her.

DeliciousBakedPie's mother bringing DBP and most of his friends to Mc. Donalds. 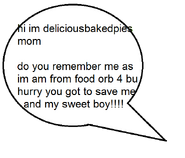 DeliciousBakedPie's mom's speech which introduces her return in Greenboy Orb 8. 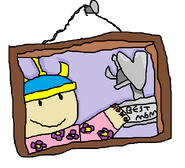 A picture of DeliciousBakedPie's Mom in a picture frame, inside the Puzzle Factory in Greenboy Orb 8.
Add a photo to this gallery
Retrieved from "https://the-food-orb.fandom.com/wiki/DeliciousBakedPie%27s_Mom?oldid=8513"
Community content is available under CC-BY-SA unless otherwise noted.