DeliciousBakedPie is one of the main characters and the hero of the Food Orb series. He always gets captured by the main villain Evil Donut, his minions, and the Food Orb Team.

DeliciousBakedPie's appearance is a beige-colored ROBLOXian, with a lime-green shirt and navy blue pants. He is also seen wearing black shoes with green flames on them. The main hat that DeliciousBakedPie usually wears is the Bluesteel Warhelm of Rekt.

DeliciousBakedPie is actually 12 years old in real life, and lives in the Washington State in the U.S.A. His favorite color is green. His favorite foods are: Chips, tater tots, mashed potatoes, McDonald's chicken nuggets, waffles, white cheddar cheese, and red velvet cupcakes. He is currently in 6th grade.

DeliciousBakedPie's house had two versions from the beginning, and the newer Food Orb games. In the past, DeliciousBakedPie's house was all colored brown from the outside. Inside the house are two floors. On the 1st floor, there is a green couch. There are also "scary" Chinese masks hanging from the walls. Infront of the couch is a flat-screen TV, where Master Techbot captured DeliciousBakedPie from. There is a black and white picture frame with a picture of a tree. On the 2nd floor is where DeliciousBakedPie's bedroom took place in. It has a table and chair with a computer on it. Ninjago posters are placed in some places of the walls, and one shelf appears with a golden hammer, a golden warhelm, a Master Techbot toy, an Evil Mustard toy and a Light Lord toy, from micky455's series. There is also a bed with a green blanket with Ninjago titles on it. On top of the house is a chimney.

DeliciousBakedPie's House v2 DeliciousBakedPie's house had a new update to it, and had better-quality decals, and a bigger size. The outside of the house has a green square pattern, and the insides of the 1st floor has a beige square patterned wall. The flat-screen TV color is lighter, and does not have the "Samsung" name on the bottom. The green couch does not have any differences, but the staircase is placed differently. On the 2nd floor, DeliciousBakedPie's bedroom is much bigger. Another TV is placed inside the bedroom, and the bed has a new blanket, which has Evil Donut on it saying "muahaahaa!! i am evil donut!!", and an extra window has been placed at the back area. The shelf includes different toys, which includes an Evil Donut toy, an Evil Smore toy, a golden hammer and warhelm, and a deadly dark warhelm. The roof on the top of the house is colored yellow, and the chimney has been removed (probably because the house doesn't have a fireplace). 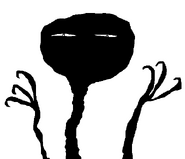 The previous drawing (originally for the Tech Orb 7 monster contest) that got content deleted. 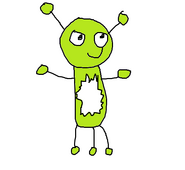 The monster entry drawing of Bob the Alien for Dark Orb 10.

DeliciousBakedPie's shirt with DBP himself on it in real life. This shirt was made by someone who did ROBLOX shirt requests.

A GIF made by DeliciousBakedPie with himself in it, decaying. 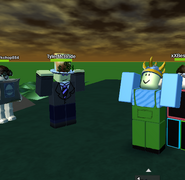 DeliciousBakedPie's youtube icon.
Add a photo to this gallery
Retrieved from "https://the-food-orb.fandom.com/wiki/DeliciousBakedPie?oldid=5591"
Community content is available under CC-BY-SA unless otherwise noted.