Evil Big mac (AKA Evil Cheeseburger) appears in BadTheBloxxer's Tasty Orb. He looks much more detailed in Tasty Orb rather than in Food Orb, though he does not have a model appearance in the games. The top and bottom parts are the bun parts. The parts between those two buns is a patty, cheese, ketchup/tomato, and some purple stuff at the top that is probably garlic or onions. Evil Big mac appears to have an evil-shaped eye look, but the line in the middle makes it look like he has glasses.

The second Evil Big mac model which was never used. 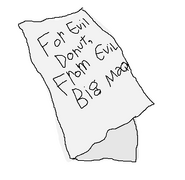 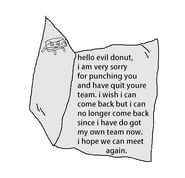