In Food Orb 0, there are 3 roads that remain in the lobby part. The three of the road's names are Diliwok Road, Bostk Road, and Saxwox Road. On Diliwok Rd, there is a flower shop on the left. When you get past the exit of the flower shop, you will find another pathway that leads to a room called Realisticland, where everything seems to be realistic. It is where King Realistic lives at. To the right of the road, youll find Biscuit, the realistic dog. There is a tightrope challenge inside of Biscuit, and if you fall down, you'll fall into the green goo, and you'll have to do it again. To the far middle of the road, there is a colorful tunnel with a hoop on the bottom. Jump through it, and then you will teleport into a new area. Dexter the Giant Demon Head appears in that area. Go to the end of the white conveyor belt path and then you will find an invisible ladder that leads to the top of the room. However, you actually don't go to the top of the room, you'll go through a dark tunnel and if you look back, you will realize that you came out from an elephant's trunk. The elephant's name is Henry, the Sleeping Elephant. Inside the yellow room, there is a green teleporter and a blue teleporter that appear as walls. If you go inside the green teleporter, you'll teleport inside a Spider Home. Continue walking on the reflecting path, which leads you to an abandoned-looking Evil Donut Lair. There is a door, which leads you to an area where Evil Donut and his parents appear, but only as mutating donuts on top of goo puddles. If you go to the blue teleporter, you'll teleport inside a purple cave, and then you'll see some tall monsters for sale. In the middle of the cave, you will find the Tall Purple Monster for display, and for sale.

Bostk Road There are only two areas on Bostk Rd. To the right direction, you will find the Monster Hotel, which is where all the monsters which won the monster contest are displayed at. In the far middle of the Bostk Rd, there is a invisible conveyor belt that slowly moves you to a giant computer. Touch the computer screen, and then you'll go directly inside it. Continue walking for a bit, until you find Master Techbot as a baby, inside a container. You will also find Master Techbot's parents as brains inside containers.

There are about 4 areas on Saxwox Rd. To the very right of the road you are on, there is a television with a title on it that says "The Crazy Wackle Doodle Show", with a blue character on it (his name is Mr. Wackle Doodle). Go inside the screen, like you do with the computer, and you'll get teleported into the TV show. There is also a storyline in the show. The story turns out that Mr. Wackle Doodle is lonely, and does not have any friends. After describing how Mr. Wackle Doodle felt, Mr. Wackle Doodle decided to look for friends. Then Mr. Wackle Doodle became friends with two characters. One of them were pink and the other one was orange. After the storyline part, there were some red text on the walls that said "HE WAS FINE WITH IT." That means that Mr. Wackle Doodle was fine without friends after all, and that the storyline was false. There is a little opening on the side of the wall. Fit and go through it, and you'll go into a different area of the show, which has a creepy ambient of having the background colors inverted. The music changes, and you are stuck on a conveyor belt, unable to move. The first two scenes has the orange character laying on the trunk of a tree, dead. The next scene has the pink character, that has a stick impaled into her, while getting hanged. The 3rd scene has Mr. Wackle Doodle in it, covered with blood. He is shown holding a knife/sword, and he is saying "i will do whatever it takes to kill you..."

You get a badge at that area, and then you will get teleported back to the spawn. In the far middle of the Saxwox Rd, there is a tower with green roofs with eyeballs on it. There are floating balls that reflect to the skybox, and you jump on the balls to get to each floor on the tower. When you get to the top of the tower, there is a big cloud infront of it that says "FOOD ORB 0" on it. You can clearly see that all the clouds are hanging from strings. To the top right of the tower is a "Eye in the Sky" camera room that has an eyeball wallpaper on it. There is a turquoise-colored chair and a tube that you look through. If you sit on the chair, you get to look through the camera tube. There are about 6 cameras scattered around the map. To the top left of the tower is a piece of paper that has writing on it. If you jump onto the piece of paper below, you'll get teleported into a different world where everything is made of paper. There are paper houses, and paper stickpeople. There is also a paper sun that looks at you wherever you go to, and some paper arrow signs. At the end of the pathway, there is a paper portal that you go inside of. When you get through the portal, you will teleport back onto the top of the tower.

In Food Orb 1 (which was the first Food Orb game), has a very old design. The monsters look more simple, and had monster designs like red412's. The skybox was a bit simple, too, which also had the monsters in it. Even the first scary shortcut area in the Food Orb series used Tinfoilbot's monster decals/images in it, with a "creepy" version of the skybox on the walls inside it. Dexter had an old design, with his tongue sticking out this time. Evil Donut had a old home in this game, which was a big cyan building with two windows on it. One of the windows were boarded up. Inside of the house was a kitchen on the left, a storage room full of chemicals and toxic on the right. On the second floor, there is a bloody bathroom on the back left, and there is a door on the back right, but it is unknown what is inside, since you are unable to go inside it. Inside the very far back middle of the house is Evil Donut's lair. Evil Donut's lair has been changed in the newer Food Orb games, and Evil Donut's old house does not really appear anymore.

Evil Donut's Weird World had a major appearance in Food Orb 7, with a design that was a bit newer than Food Orb 1's designs. After the storyline part in Food Orb 7, there is a new area that is called Evil Donut's Weird Room. It has a large similarity between Vodgreen's Weird World from one of Tinfoilbot's Dark Orb games. A golden duck appears inside the weird room on the second floor, and a Bingo-like clown piggybank is connected on top. A nickel square coin is seen above. Lots of structures and details were based off from Vodgreen's Weird World, and has a large similarity between those two worlds now. A new skybox and monsters appear in this game. An example for a similarity between Evil Donut's world and Vodgreen's world is the Giant Evil Donut Head. It is a head that looks like Evil Donut instead, and a conveyor belt pulls you to the inside of its mouth, which leads to another room. This model made the fact revealed that Evil Donut actually has two pointy teeth. 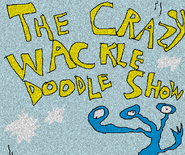 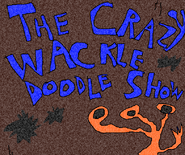 A negative version of the show title which appears frequently at intervals. 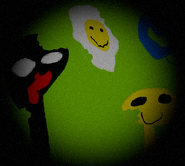 The skybox decal of Food Orb 0. 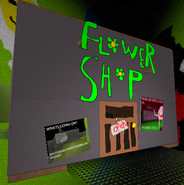 The flower shop from Food Orb 0.

Realisticland, an area in Food Orb 0. 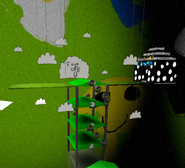 The tower and the camera room in Food Orb 0.

A backdrop from Food Orb 1. 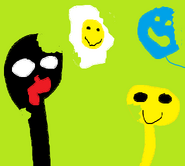 The skybox decal from Food Orb 0 before special effects. 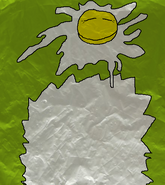 A wallpaper decal from Food Orb 0. 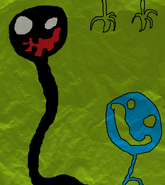 Ditto.
Add a photo to this gallery
Retrieved from "https://the-food-orb.fandom.com/wiki/Evil_Donut%27s_Weird_World?oldid=6436"
Community content is available under CC-BY-SA unless otherwise noted.