Start a Wiki
Evil Garbage Can's Scary World is an alternate world between Evil Donut's Weird World. It is like the Weird World, but a bit more creepier! The Scary World appeared in games Food Orb 12 and Food Orb 15. Almost every design in this world is a black and red color. Even the pathways and structures were the same colors. Until in Food Orb 15, Evil Garbage Can's Scary World has lots of colors, and designs like from Vodgreen's Weird World. The designs in that period had structures that were red decorations, weird world night charms, smiley faces, etc. The new version of the world has a new area called the Junkyard. The Junkyard is where the battle between Evil Donut's team and Evil Garbage Can's team took place at. In Food Orb 15, its been revealed that the guard of the junkyard is a giant fly, which seems to be very hostile. A giant KILLBOT-3000 machine has been used as an obstacle in Food Orb 15. Evil Garbage Can's World also has new monsters and characters. For example, the red duck head in the beginning part. It is also predicted that the Scary World has a flower garden. The flowers are used as an obstacle in Food Orb 15. You can bounce on the flowers that are yellow, but your character will get killed if you jump on the red ones. Sometimes, there are gray triangle-shaped structures with holes in them. Those structures are called Hongkelys. Nothing is really known about Hongkelys, they only float around in some of the areas, and in backgrounds. Another structure in the Scary World is the Weird World Night Charm. These night charms are the only charms that can form from the ground. Night Charms are like the Weird World Charms from Vodgreen's World, except that they are navy blue, and have yellow spikes on the back. Another example for a decoration is a flying red hand with a blue letter 'e' on it. It has once been said from DeliciousBakedPie that the letter 'e' stands for the word "effort".

A flower garden in Food Orb 15.

A strange blue backdrop with boots hanging from the top.

A spooky backdrop from Food Orb 15, used for a scary shortcut. 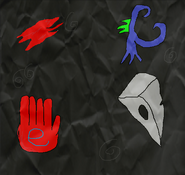 The skybox decal for Food Orb 15.

The front of the Junkyard.

An area in the Junkyard.

The scary shortcut of Food Orb 15.

The scary shortcut in Food Orb 12.
Add a photo to this gallery
Retrieved from "https://the-food-orb.fandom.com/wiki/Evil_Garbage_Can%27s_Scary_World?oldid=6396"
Community content is available under CC-BY-SA unless otherwise noted.