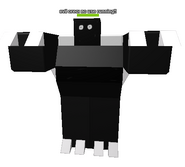 A monster/boss version of Evil Oreo that attacks you. From Food Orb 5 - Europe. Evil Smore also seems to have a monster version of himself as well.
Add a photo to this gallery
Retrieved from "https://the-food-orb.fandom.com/wiki/Evil_Oreo?oldid=5606"
Community content is available under CC-BY-SA unless otherwise noted.