Evil Smore's appearance is obviously a smore with black spots on the front and back sides. Between his body are some chocolate and vanilla creaming. He has black stick limbs, like any other character does.

It is known for Evil Smore to like putting/adding down spikes to block users from saving DeliciousBakedPie.

It has been confirmed by CrazyROBLOXAddict that Evil Smore used to be a wizard robloxian, until a curse had happened on him, and turned into a smore (Evil Smore). DeliciousBakedPie was gonna add it to Food Orb 0, but had either decided not to, or either forgot about it. Nothing much is known about this information. 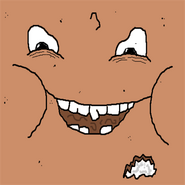 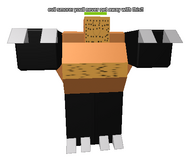 A monster/boss version of Evil Smore from Food Orb 5 - Europe. Evil Oreo also seems to have a monster version of himself as well. 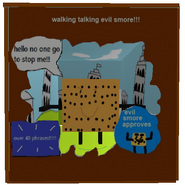 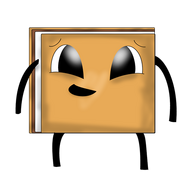 Evil Smore holding a spike.
Add a photo to this gallery
Retrieved from "https://the-food-orb.fandom.com/wiki/Evil_Smore?oldid=7298"
Community content is available under CC-BY-SA unless otherwise noted.