Food Orb 3 is the third game of The Food Orb Series. It is created on 3/15/2014. This game is a classic compared to the other games in the series. The game has no badges. In this game, Evil Donut cages DeliciousBakedPie in the Mayan Temple and attempts to destroy the world with The Mayan Calendar.

"Note: This is a Tinfoilbot-like game. Credit goes to Tinfoilbot for some of the decals. Credit also goes to hauntguy360 and xXxFireKingOfDoomxXx for the ideas for Evil Cookie and Evil Pizza. 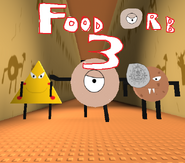 The decal of the Mayan Calendar. More detail is in the center than around the edges.

The wall decal of the scary shortcut.
Add a photo to this gallery
Retrieved from "https://the-food-orb.fandom.com/wiki/Food_Orb_3?oldid=8059"
Community content is available under CC-BY-SA unless otherwise noted.