Food Orb 5 is the fifth game of The Food Orb Series. It is created on 3/30/2014. This game is a classic compared to the other games in the series. The game has no badges. In this game, Evil Donut cages DeliciousBakedPie in Europe and you have to get pass Evil Smore and Evil Oreo as bosses through the Coliseum.

"Note: This is a Tinfoilbot-like game. Credit goes to Tinfoilbot for some of the decals. Credit also goes to crazybloxion and AwsomeGuest37 for Evil Oreo and Evil Smore.

story: ounce upon a time deliciousbakedpie was happy in hes room until an arm came out of the window and grabbed deliciousbakedpie and trapped him in europe. in this game evil oreo and evil smore team up with evil donut's team!!!" 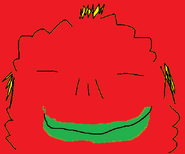 A face decal of a red monster that resembles Greenboy. 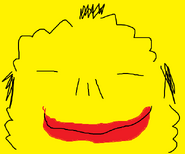 Another face decal of a monster that resembles Greenboy, again.
Add a photo to this gallery
Retrieved from "https://the-food-orb.fandom.com/wiki/Food_Orb_5?oldid=8061"
Community content is available under CC-BY-SA unless otherwise noted.