Start a Wiki
Micky455 is one of DeliciousBakedPie's old friends and one of the first orbers. He seems to be pale white, and the only orber with a diamond shaped head. He wears "The Helm of the Flashing Bolt", black Orber-like clothes, and the default Robloxian face. He made the Attack of Darklord series and the Evil Mustard series. He made some decals for DeliciousBakedPie's Food

Micky455 has appeared in only Food Orb 2 - Japan. In the game he appears to be the most wimpiest one (He is really careful in the hard spikes and is the only one that doesn't go through the scary shortcut). Micky455's villains do have references in the Food Orb games though. In DeliciousBakedPie's old house, there are toys of Evil Mustard and Lightlord, both in Micky455's games. 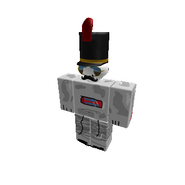 One of Micky455's various profile images. 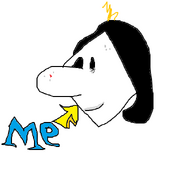 Micky455's youtube channel banner. (credit to Micky455 for the banner)

Thin
Micky455 showing how to climb some of the broken ladders. 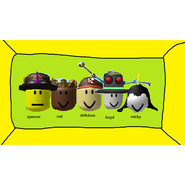 Micky455 in one of DeliciousBakedPie's picture frames.
Add a photo to this gallery
Retrieved from "https://the-food-orb.fandom.com/wiki/Micky455?oldid=7306"
Community content is available under CC-BY-SA unless otherwise noted.