Purple Monster's appearance is a purple body, with a thick face on the front that has black eyes with white pupils, a red nose, and a scribble mouth that has drips of blood dripping on the side. Purple Monster has a bumpy body shape, and has transparent arms that each have 4 fingers. 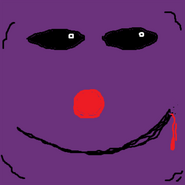 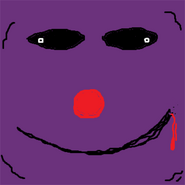 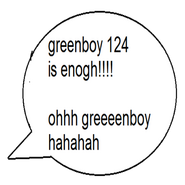 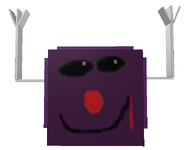 Purple Monster's first appearance in a game called Vodgreen's World 1. Only Purple Monster is displayed in a background and not as a model.

Ditto, but an improved version of the decal from Vodgreen's World 0. 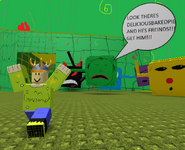 Purple Monster and his team chasing DeliciousBakedPie. Notice how he is upside-down. 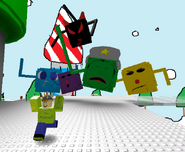 Purple Monster in the chase scene of Greenboy Orb 2.
Add a photo to this gallery
Retrieved from "https://the-food-orb.fandom.com/wiki/Purple_Monster_(Greenboy%27s_Helper)?oldid=7314"
Community content is available under CC-BY-SA unless otherwise noted.