Start a Wiki
Spencergamer was a robloxian who took part to save DeliciousBakedPie in Food Orb 2 - Japan, along with Red412, Micky455, and Boydjrocker.

Spencergamer is the creator of the Shadow Apprentice series, and the creator of Master Boing Boing. His roblox avatar has Tinfoilbot's Darklax hoodie and chasermar16's fan pants. His head is yellow, wears the pink unicorn horn, and Steampunk bowler. He also has the star face. Spencergamer is one of DeliciousBakedPie's old friends. Spencergamer only appeared once in the Food Orb series, and that appearance is in Food Orb 2 - Japan. In the game, he isn't scared like the other robloxians of the scary shortcut, and is more observant too. 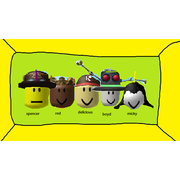 Spencer in one of DeliciousBakedPie's picture frames. 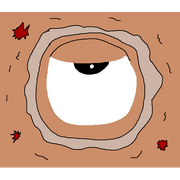 Spencergamer as he appears in Don't Hug Me I'm Scared 3 Orber Edition. He takes the role of Unicorn Boy.

"And your heart will find its home."
Add a photo to this gallery
Retrieved from "https://the-food-orb.fandom.com/wiki/Spencergamer?oldid=7881"
Community content is available under CC-BY-SA unless otherwise noted.