Start a Wiki
The Haunted Mansion is a big place area that appears in only one game (Food Orb 11 - Spooked Out). It is a giant mansion with big rooms inside of it that has obstacles inside of it, as well as monsters. This area is used by Evil Donut to capture DeliciousBakedPie.

The basement is the starting place for Food Orb 11 - Spooked Out. The walls, floors, and ceilings are made out of stone bricks. Deadly "sewer goo" is one of the obstacles that can be found firstly in the basement. This room is also the very first appearance that Evil Cheesecake makes. A fan art room and a contest entries room is also included just for bonus content.

The main room is the second area that you enter that is inside the mansion. A purple/black wallpaper is used along with a red carpet rug. A chandelier can be seen if you look up at the ceiling ingame. A grand staircase is at the back of the room, which has two doors which can lead to either the Hard Spikes (left door), or the Scary Shortcut (right door). Many various other doors can be seen on the sides of the room. A picture with a golden frame shows a white scribbled figure running in the darkness.

The elevator is a room in the game which appears to be a very tall room, since it is an elevator and that elevators are supposed to make you go on a higher level. A dark grey panel with buttons can be seen but not too clearly as it is partly hidden in the darkness. Red walls with gold stripes surround the room, along with gold-colored railings that you are supposed to climb onto for the first obstacle that requires this room. In the second obstacle you have to jump on small and big boxes. In the third obstacle you have to avoid the ectoplasm that the ghosts are producing. A big window with a giant Japanese-like ghost is also there. The last/fourth obstacle that requires the Elevator room is a spiderweb which you are supposed to climb onto, but you have to avoid the spiders that are crawling on it.

The hallway is a minor area which seems to have a strong resemblance to the Haunted Mansion ride in Disneyland. In this room has long rows of doors. Only one door leads you to a giant kitchen. The walls are striped with red and black colors with squiggles on them.

The kitchen is one of the many huge rooms that is in the mansion. The room includes a white tile floor, white walls and rows of big counters. A refrigerator is probably the first thing you will see, along with the stove which you are supposed to climb up and out of. One window is in this room, with a mysterious tree-hand-like figure behind it. A sink with various plates and carrots is an obstacle where you have to avoid the water and to jump on whatever is floating inside of it. A path-moving obstacle with monsters which you have to avoid is the last obstacle in the kitchen. At the end of this last obstacle will lead you to a living room.

The living room is the room that you arrive in after going through the vents from the kitchen. in this room, there is an odd wall that is lime-green, beige/brown couches, a brown table, another table that is small with a television on it with a strange face, and a big bookshelf with books in it that you have to avoid touching. The ghosts in this room are similar to the ones in the elevator, except you have to jump on top of the ghosts to get to a teleporter which teleports you inside the bookshelf. A character in this room named Larry the Lamp is a big silver lamp with eyes on the sides with black eyebrows which makes him look a bit irritated, with a lightbulb in its mouth which probably resembles a tongue. The next vent in the living room leads you to the bedroom area.

The bedroom is an area in the mansion. It is a giant bedroom with light purple wallpaper with dark purple diamonds and lines. There is one window on the right side of the room with three monsters peeking in it. Two big shelves with a giant monster bed is in the room. For the giant monster bed it has a round beige mouth with yellow glowing eyes. A strange goo material is on the bed, so you can bounce on the bed itself. A picture with a yellow frame shows DeliciousBakedPie and Tinfoilbot in it. A blue clock with eyes on it includes a hidden badge behind it. The blue clock appears to have 4 black legs with golden bowls on the top that make the clock ring. The entire floor of this room is colored gray, which is probably supposed to be a gray/beige carpet. On the ceiling is a big ceiling fan that spins around, and you are supposed to walk on the fan's blades to get to a ladder which takes you to an attic.

The attic is the last room that is inside the mansion. It has a grey floor with large wooden walls that seem to make a point on the top. Lots of small and medium-sized boxes is in this room which you have to jump on if you want to get to the next obstacle. This box obstacle has references to other things. For example, the Evil Donut toy, a box with a villain named Toy King in it (it is a toy), an alternative of the clock monster from the bedroom but seems to be in a broken state, and an abandoned toy version of the Tall Purple Monster with half of its right arm missing with an eye missing. The second and last obstacle in the attic is a complex vent system that you have to find your way out of. It has a strong resemblance to that of a maze. When you find your way out of the vent system, you can see that you escaped out of a gray metal pipe with a roof on it. This takes you to the very top of the mansion where DeliciousBakedPie in a cage is at.

The roof part of the mansion is your final destination to saving DeliciousBakedPie. This roof area has a blue roof-plated texture with the pipe which you came out of on the side. You can see the entire game and mansion itself from the view of looking from the roof. If you look on the other side of the roof, you can see a fireplace's chimney, even though there is not a fireplace to be found in the bedroom. Also when looking from the roof, you can see the window for the bedroom where the monsters are peeking into. 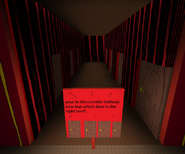 An unknown room which is similar to the basement.

A side of the roof where it shows a fireplace chimney.

The whole mansion. The positions and designs of each room gives it an odd shape.
Add a photo to this gallery

Retrieved from "https://the-food-orb.fandom.com/wiki/The_Haunted_Mansion?oldid=7913"
Community content is available under CC-BY-SA unless otherwise noted.